After more than 25 years of search and experience, we created an Oracle Deck that was missing not only from the Greek but also from the global community.

The well-known Gypsy deck and its variations is one of the most famous Deck reading and predictions in the world for many years. The G.R.oma or otherwise the Greek Gypsy is a deck that consists of 52 cards and is adapted to the Greek Gypsy Culture that you lose in the depths of the centuries. 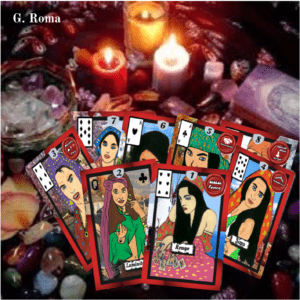 In 1332, a Franciscan monk from Ireland visited the island of Crete. And there, he wrote this description of what he called “descendants of Cain”, whom he met outside the city of Heraklion:

“Rarely, or never stay in one place for more than thirty days. but always, as if carrying the curse of God with them, after the thirtieth day, they go like angels and fugitives from one place to another, in the manner of the Arabs, with small, elongated, black, low tents, because the place where settle becomes during this time so full of parasites and dirt that it is no longer habitable. ”

This was the first written speech in Western Europe of people becoming known as Gypsies or Romanians. For the next four centuries, these people, who began their journey from northern India a thousand years ago, would cross every kingdom and principality in Europe. By the 18th century, they had traveled to America and today live all over the world. 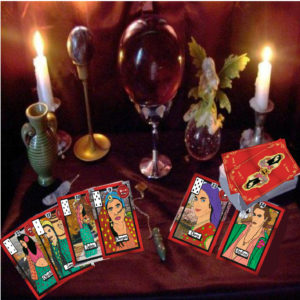 The G.R.oma deck is hand-painted on watercolor acrylic paints inspired by authentic Gypsy faces. Each card has the representative name of the person based on the ancient nomenclature of the Gypsies where the names are used in life, in communication, in everyday life. This group of names reflects the value of some positive quality (luck, wealth, happiness, fun, beauty). These include: Bakhtalo (happy, happy), Kuch (precious), Rupa, Rup (ruble) or even flower names: Rosa, Margot, Viola, Rubin, Jacqueline, Gyuli.

Secret symbols played a big role in the lives of gypsies, wandering and secrecy. Thus the deck G.R.oma is enriched with 40 secret Gypsy symbols that give extra importance to the interpretation of the cards….

The G. Roma deck is printed on Illustration paper (cardboard) with dimensions 70 x 120 mm and weight 350gr. Contains instructions for the interpretation of each card as well as how to throw. It also contains a velvet case and is packed in a hard matchbox type box.

No. 5 Name: Bogdan (the one given by the Lord). Symbol: ACE Spades. Sign: Handshake 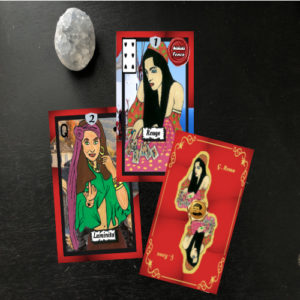 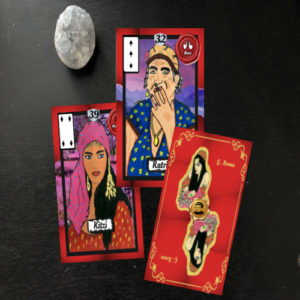 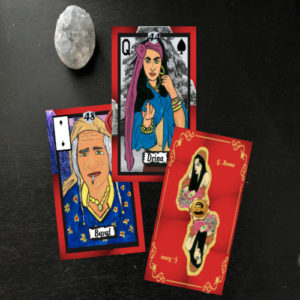 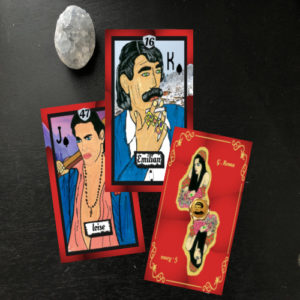